Adventures in the Desert

During the 250km Fire & Ice Ultra in August 2016, we met Peter Newland and Sarah Watson who were running for a charity called ‘For Rangers'. Over the week we discovered that the For Rangers team are a group of ordinary, if slightly mad, people from all over the world who are taking part in some of the hardest, most challenging endurance events on the planet. They aim to draw attention not only to the plight of Africa's wildlife and the poaching crisis but also to the hardships and dangers that the rangers are exposed to in trying to protect our wildlife – and in doing so, raise funds that go directly towards rangers' welfare.

After meeting Peter and Sarah, we decided that it would be a great idea to join the For Rangers team and raise funds to help the rangers protect the wildlife. We already had an entry in the 2017 32nd edition of the Marathon des Sables (MdS), a race which covers approximately 250km in five timed stages and one compulsory charity stage. The course takes you through a formidable landscape in one of the world's most inhospitable climates, the Sahara desert. You must be fully self-sufficient, carrying on your back everything except water that you need to survive. You are given a place in a tent to sleep at night, but all other equipment and food must be carried.

On the way to the airport we were asking ourselves questions like: had we done enough training?; would we have enough water?; how would we cope in the 50-degree heat?; would we have nice tent mates?; could we complete the world's toughest footrace?

We boarded the plane at Gatwick with 180 other UK MdS competitors; the air filled with nervous excitement at the adventure we were about to embark on. We arrived in Quarzazate, Morocco and were met by the MdS organisers where we then boarded a bus for a six-hour transfer to the first bivouac (camp).

During the journey, we received our route book so we could look at each stage. Despite being in the desert, only about 20% of the course was sand dunes with the rest made up of rocky climbs and descents, dry river beds and rocky, sandy tracks.

When arrived at the bivouac, we were allocated to tent 129 which already had five people in as they had arrived on an earlier flight. The tents were very basic Berber tents with two open sides and a rug to sleep on. These tents would be our luxurious accommodation for the next eight days. Our tent mates for the week were Alec, Adam, Leon, James and Rob, who have now become friends for life after sharing such an amazing experience.

We woke at sunrise, about 5:30 am. Nervous chatter filled the camp as everyone prepared for the day ahead. Water was heated on small stoves to add to our dehydrated breakfast. We started a daily ritual…Prepping feet with Gurney Goo (foot lube), putting on ‘toe socks' followed by outer socks. Two pairs of socks were to prevent rubbing – this worked well, and neither of us got any blisters. Another important daily ritual was applying sun cream. P20 Factor 50 was the sun cream of choice; once a day application which worked fantastically.

Each morning the local berber's came and took down the tents, The UK competitors were on the outer rim of the tent horseshoe, and our tents were always taken down first. How quickly they got to us depended on which side of the camp they started. Once the tent was down, you needed to put on your hat and sunglasses as even at 7 am it was 40 degrees and very bright.

Day 1 followed a slightly different format as we all had to go and stand in a massive number 32 that had been marked out, the reason being that this was the 32nd MdS and it made a great aerial shot.

We had a daily race brief by Race Director, Patrick Bauer, then we were ready to start and the familiar music of ACDC's ‘Highway to Hell' started, and we all funnelled through the starting gantry for Day 1. Hearing this song was very emotional as you were never sure how each day would unfold.

We knew the terrain for the first day was relatively flat with small dunes, lots of sand and a slight climb to the finish. We aimed to take it easy, get used to managing our hydration and finishing in one piece with no blisters.

The course was marked with red paint and was easy to follow. Each checkpoint had a full medical team as well as somewhere to get out of the sun. Mostly we just stopped for 5-10 minutes to top up our water supply, take our salt and have a snack.

Nearing the end of Day 1, we reached the top of the final dune and could see the finish 2km away. We both felt such a sense of achievement at finishing, and it boosted our confidence that maybe we could be MdS finishers… although there was a long way still to go.

It was a great feeling that everyone in tent 129 made it safely home, some faster, some slower but all that mattered were that we all made it. Water was heated, dinner was eaten, stories exchanged, bags packed for the morning and then bed as it was nearly 7:30 pm and getting dark. 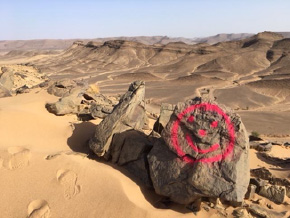 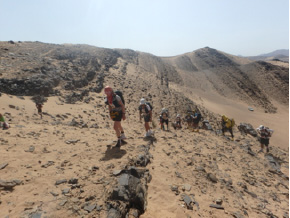 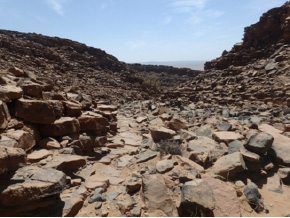 At the race brief, we were told Day 2 would be tough as it was a long stage with lots of sand, climbing gorges and very steep descents. They weren't wrong.

Day 2 was all about putting one foot in front of the other as the dunes were very tiring and temperatures reached 50+ degrees, keeping hydrated and on top of your salt consumption was important. The route passed along several dried river beds, and there was a long slow climb up the El Offal Jebel. On reaching the top of the jebel, the views were stunning. You could see the finish about 5km away, but first, there was a steep descent using the rope to steady ourselves followed by a long run along the dried river bed to finish.

This was our favourite day, as it involved lots of rocky climbs up and over several jebels, stunning views from the top of the ridge and only a few sand dunes. The only downside was the last 6.6km along a stony plateau where you couldn't see the finish until the last 500m…. who knew 6km could take so long!!

The long stage; we were all very apprehensive as we wondered how our bodies would cope with 86.2km in the heat. We had a time limit of 35 hours to cover the distance which sounds easy but not when the temperature was scheduled to reach 56 degrees. We set off at 8 am to the sound of ‘Highway to Hell', and it was already 40 degrees. We covered a long flat section passing by a local settlement before crossing a dry river bed; the scenery was like something out of ‘Mad Max'.

The long stage course covered nearly all the varying terrain the desert has to offer, dunes, jebel's, river beds and of course camels.

The night section was quite surreal as there was nearly a full moon so we didn't need a bright head torch and just navigated by looking for the glow sticks which marked the course. It never really cooled down and night temperature only dropped to 25 degrees. The sunrise as we neared the finish of the long stage was spectacular.

Crossing the finish line after covering 86.2km was such a great feeling, we both felt strong and knew there was only a marathon to do, and we would be MdS finishers.

The course for the final stage was a straight line, crossing dried river beds, dunes and rocky plateaus. It was also the only day we encountered local children asking for food and hats. It was a hot, windy day where we were told to take extra salt tablets as the wind was causing some people dehydration issues.

The final few miles took us past an old silver mine and village before the final 3km stretch to the finish.

It was an incredible feeling crossing the finish line, accepting our finishers medals with a tear in our eye. We had a celebratory cup of Moroccan tea and a finishing photo before collecting our water and heading back to the tent.

All of tent 129 finished the MdS which made the experience even more amazing. 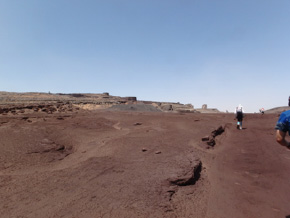 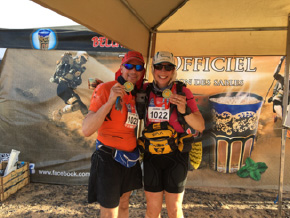 To support the local community, Patrick Bauer has set up the Solidarity Charity, and the charity stage is to raise awareness of the charity and the good work it does. It has recently built a school in Quarzazate to educate not only the local children's but their mothers too.

We all wore a T-Shirts with the charity's logo, and Tent 129 walked the last stage together crossing the Merzouga Dunes. It was great fun, and we chatted about our week and the highs and lows. There was also an air of sadness knowing our adventure was coming to an end.

After we'd finished, we were transported by coach back to Quarzazate and dropped off at our hotel for a few nights before flying home. The 'all-you-can-eat' buffet at dinner and breakfast were amazing, especially after living off rehydrated food for a week.

Would we go back? Definitely. It was one of the toughest but most amazing experiences of our lives, and the occupants of tent 129 now have a unique bond that will be with us forever. Would we recommend it to anyone else? Yes, definitely!

We managed to raise about £1,000 for the ‘For Rangers' charity, and while we had a tough few days in the desert, this is nothing compared to the dangers that the Rangers face every day.